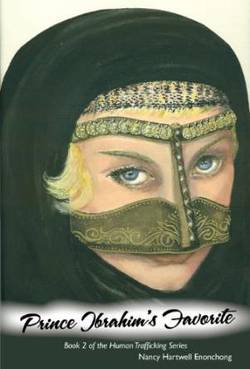 This 78,000-word novel is the sequel to Harem Slave, but may be enjoyed independently. It continues the saga of Tammy Simmons, now Sudari Abdoulaye, an all-American girl who spends more than five harrowing years as a slave on the Persian Gulf and her new husband Yerima, the ambassador from Cameroon, who falls in love with her and takes her back to Yaounde as his fourth wife.

She is suddenly faced with overwhelming adjustments: recovering from years of degradation and close confinement and reinserting herself into a confusing and intimidating world, being the lowest-ranking wife in a polygamous household, learning how to function in exciting and proudly African Cameroon, and adapting to the very public life of a wife of a prominent personality (Yerima is now Minister of Foreign Affairs). She thought she could push a button and return to her pre-enslavement persona, but being back in the real world is a lot more difficult than she had expected.

Prince Ibrahim, her most recent owner, had become obsessed with Tammy because they pass out in each other’s arms. He calls her Mukhmala (velvet). Nevertheless, when she murders the smarmy Dr. Hassan – who for years took great pleasure in tormenting her – he respects the terms of the lease to the men’s club and releases her for execution. He never imagines that Yerima will rescue her, emancipate her, and marry her.

At first, Ibrahim is a really good sport about losing his favorite slave. He gives the couple lavish wedding gifts, and tries to find solace in the other girls he owns, particularly those in his fabled Il Giardino Posteriore (the Rear Garden), his collection of more than a hundred of the most beautiful female posteriors in the world. None of them can hold a candle to his beloved Mukhmala, however, and he regrets more and more having let her go. In desperation, he continues to buy girls, cruelly destroys the men who refuse to sell him those that he wants, feeding them to crocodiles, having them hot-iron branded and set to work in brothels, has them hamstrung, their eyes gouged out… Through a combination of intimidation and connections, he has been able to get away with these outrages for years, despite a highly vengeful society obsessed with protecting family honor.

By most standards, Il Giardino Posteriore is a nice harem: spacious, clean, with adequate food and medical care, and a variety of activities to help pass the time. Nevertheless, it’s a suffocating, stultifying, completely closed environment, and most of the girls hotly resent being thrust into completely alien surroundings where their only value is between their waists and their knees. To make things worse, Ibrahim executes the girl with the lowest performance rating each month. Further, he doesn’t exactly improve morale by occasionally showing up and, to underscore his absolute authority, points to a girl at random and orders her execution. Certain new policies prove highly unpopular, and many of the girls are now planning the unthinkable: a slave revolt.

Meanwhile, Tammy makes steady progress, overcoming one hurdle at a time. She gets along fine with her two Fulani co-wives, but the other American is horrified that her new co-wife had worked in a brothel and is downright hateful. Tammy pours herself into her long-delayed academic education, thoroughly enjoys tutoring Yerima’s children, and is thrilled when the President appoints her to serve on his newly created Task Force on Human Trafficking.

A pall is cast over her pleasant existence when Taymoor, an extremely kind-hearted architect who had unsuccessfully tried to buy Tammy and marry her, calls Yerima to alert him that Ibrahim has commissioned him to build a beautiful waterfall harem, and he is convinced that it’s intended for her. She tries her best to take precautions, but one day she’s on the sidewalk a few seconds too long. Despite heroic efforts that come very, very close to foiling the effort, Ibrahim succeeds in kidnapping her, spiriting her out of the country, and returning her to his possession.

Tammy consoles herself that it’s only temporary, until Yerima can find a way to rescue her. She begrudgingly gives Ibrahim just enough of herself to keep him from blowing up. She is not living up to his dreams of a blissful reunion where they make each other pass out from passion again and again. He is furious that she’s holding back, and begins to threaten her.

Yerima knows that security in the harem is so tight that the likelihood of rescuing her is negligible, so instead, he kidnaps Ibrahim himself during one of his restocking trips to Aruba. Ibrahim tells him that if he can’t have Tammy, neither can anyone else, and if she goes back to Cameroon, he will have her killed. Yerima returns to Yaounde, miserable in defeat.  Tammy has to face up to the fact that all hope of rescue is gone, and anything short of complete capitulation is suicidal. She caves in, but still doesn’t succeed in making him faint. Things come to a breaking point when Ibrahim discovers that she has been receiving coded emails from Yerima, and he threatens to have her hot-iron branded.

Taymoor, meanwhile, has included a few features in the design of the waterfall harem, such as a secret passageway, that he conceals from Ibrahim. He thus manages to steal Tammy for himself and, to the sounds of Mozart’s Abduction from the Seraglio, whisks her to his villa on the Riviera. Ibrahim flies into a rage and an intense manhunt for the pair ensues.

The harem revolt is put down within minutes, and the six leaders are severely punished. The assassination plot is uncovered; the four conspirators are tortured to death at the snuff club.

Taymoor is having the time of his life playing lord and master, and for a time, Tammy, still more or less in love with him, has fun playing his devoted little slave girl. He is preoccupied with figuring out where he and Tammy can be together long-term, safely out of Ibrahim’s grasp. They move from one friend’s house to another every few days, afraid for their lives. Taymoor finally comes to the conclusion that they will be safe from Ibrahim absolutely nowhere, and that the only solution is to have the prince be the victim of a tragic “accident.” Meanwhile, he finds a passably suitable solution, which he refuses to share with her, saying he wants to keep it a big surprise. He buys a condo in a high-security building in Paris under a German friend’s name, and the build-out is advancing nicely.

Tammy is overjoyed that Taymoor has rescued her from the mentally unbalanced Ibrahim, but even though she tries to conceal it to spare his feelings, her heart really belongs to Yerima. Taymoor buys an instructional manual as well as an assortment of accessories, and to her amazement, transforms himself from a considerate but boring lover to an extremely sexy man. Nonetheless, after several weeks, Tammy tires of being obliged to lie still for hours on end, and she can’t help but compare this mind-numbing existence to her exciting, rewarding life with Yerima. She realizes that, as nice as Taymoor is, he will never consider her as anything more than his servant, or as Yerima once put it, strictly his blonde-haired pet. Taymoor desperately wants her to make him faint and asks a lot of questions about the game of defiance that made her and Ibrahim faint at the same time. He tricks her into playing it unawares, and the ruse works: they both pass out. Now Taymoor stops talking about emancipating her altogether, which makes her even more depressed. Both Taymoor and Tammy quietly notice things of serious concern: Taymoor often suffers from severe headaches, and it breaks his heart when several times, he catches Tammy crying.

Ibrahim is in Tahiti on a restocking trip, and a new broker, Temana, tells him that he has eight of the most beautiful girls on the island eager to meet him. Ibrahim and his driver set out for the town of Tautira, a spectacularly beautiful but dangerous drive over extremely rugged terrain. A smiling Temana ushers Ibrahim into a room where there are indeed eight young people, but they are in fact men. Arab men. Sons of men that he has destroyed. Temana, actually chief of police of the town, is himself the father of two kidnapped teenage daughters. They handcuff a white-faced Ibrahim and bundle him out the door.

Taymoor finally announces that he he has found the perfect place to keep her. He covers her head to toe in black, blindfolds her, and gives her a sedative that puts her completely out. He emancipates her before a gathered crowd. As the layers and layers of veiling are removed, one of Yerima’s children recognizes her and races across the floor. Tammy, however, has eyes for only one person: a tall, handsome gentleman in a white gandoura. Yerima.

Next day, Taymoor shows Tammy and Yerima a brief news article about Prince Ibrahim’s tragic fall into a deep and inaccessible crevice; the chief of police says the death has been ruled accidental. Four days later, Tammy and Yerima accompany him to the steps of his jet, thanking him profusely. He smiles, wishes them well, and four months later dies peacefully in his sleep of a massive brain tumor.

The contents of Ibrahim’s hareem are gradually sold off. The fountain in the courtyard is silent, and cobwebs are forming in the elegant salon. The water has been turned off in the Waterfall Harem, and the tropical plants are starting to turn brown. Sometimes the curtains in the glass-walled elevated bedroom move all by themselves, and they say it can only be Prince Ibrahim, searching, still searching, for his beloved Mukhmala.