Voices from the Harem 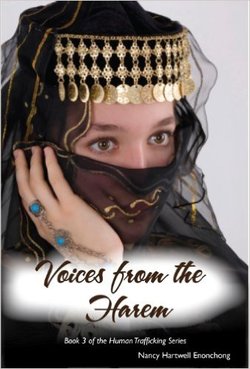 This is volume three in the Human Trafficking Series, and the companion book to Prince Ibrahim's Favorite (volume two).

Fabulously wealthy and extremely good-looking Prince Ibrahim is obsessed with the female derriere and has invested a fortune and great passion to assemble the finest collection of them anywhere: 111 beautiful rears in his fabled harem Il Giardino Posteriore (the Rear Garden).

Voices from the Harem is not really a novel, but rather a rare and fascinating glimpse behind harem walls. It is a collection of poignant stories told by the women themselves about how they were enslaved, how they ended up in there, what they think of it, and where they were before. A few are in love with him; an equal number are plotting to assassinate him. Most have dejectedly resigned themselves to being completely cut off from the world and confined in the suffocating environment of a harem.

Some recount chilling stories, such as the one who used to belong to a sheikh who flunked out of medical school but decided to operate on people anyway. He set up a "clinic" in his basement, bought slave "patients," and regularly performed surgery. Of course, he butchered most of them, but he was able to indulge his desire. Or the one who had been in the laboratory of a scientist who experimented with gags, dildos, and body glues. The experiments kept going wrong and dozens of subjects had to be put down, but were immediately replaced by fresh ones. Or the fussy prince who owned a crocodile, and if his slaves didn't perform the way he wished, he would have them fed to the crocodile on the spot.

Many tell similar stories of being lured with promises of glamorous jobs as models, musicians, or movie roles, then trapped and sold into slavery. Two actually entered servitude voluntarily. More than a few have gone quietly insane (violent insanity means a transfer elsewhere). Some responded to propositions online. Others were simply victims of opportunistic kidnappings. Fathers, brothers, step-fathers, law enforcement officers, clergy, school counselors, as well as professional traffickers, have all been involved in this unspeakable crime.