Book One - One Thousand, Nine Hundred and Four Days of Hell on the Persian Gulf 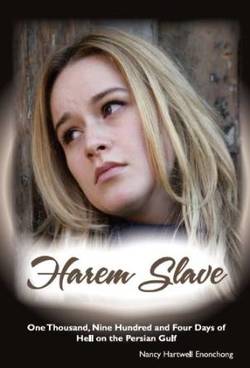 “It’s normal,” Dr. Hassan reassured her. “My golden treasure, you’re a strong girl, but you can’t expect to get over such traumatic events in a mere three weeks. You might consider getting counseling when you get home.”

The twenty-ninth of Jumada Al-Akhir finally arrived. Home! Tammy could almost smell it. She rose at dawn, flitted merrily around the room, and got everything ready with hours to spare. Time to write a few more emails, including a long one to Elaine. “I’m sorry Marisa wasn’t alive when we were rescued, but otherwise, she was lucky. Can you imagine how horrible it must be, closed up in a spooky harem, and you try to run away and they beat you, and this old geezer slobbers all over you and gets you pregnant, and you know you’re stuck there for the rest of your life? I mean, just think how horrible it would be if you were forced to live with somebody as creepy as Martin Higgenbotham, or a brute like Fuad!"

The Internet was still down, but she knew she could impose on Dr. Hassan one last time and get him to send the messages for her as soon as it was back up. She left them on the rolling table along with thank-you notes to him and Nurse Nessim.

Just as she was prepared to leave, the nurse appeared. “I need to give you one last shot,” he said. “This will help prevent jet lag."

“Thank you so much for everything,” she said, overcoming the urge to hug him. “Shukran shukran shukran shukran,” she said, hoping that by sheer volume she could make up for her almost-non-existent Arabic vocabulary. “When I get home I’ll send you something so you can remember the girl from Amrikiya.”

“Allah maa kum,” may God be with you, he replied.

Suddenly overcome by gratitude for those who had offered a hand of kindness to a suffering person, she went quickly outside.

She inspected the contents of her beige snakeskin handbag. Ticket? Check. New passport? Check. The 100 euros Dr. Hassan had insisted on giving her? Check. His card, so she could write and let him know how she was doing? Yes. Everything was just perfect, except for the fact that she had to cover up her beige pleated Gucci with the stupid black cloak.

Enveloped as she was in the ankle-length black abaaya, a hair wrap, and a long black veil, just in the fifty feet or so between the air-conditioned clinic and the white stretch limo, she thought she’d positively suffocate. She felt bizarre, too, as if she weren’t actually a person at all, but just an oversize Idaho potato wrapped up in a black bag.

She’d resisted the veil. “If Arab women let men oppress them, it’s their business,” she said, “but I’m not covering up my face.

He gasped. “It’s not oppression at all,” he explained, “just a little different sense of decency. No self-respecting Arab woman would expose her face to strange men any more than you’d walk topless down the Champs Elysées. My wife, for instance, who studied in Paris, wouldn’t have things any other way. She likes having men deal with her on the basis of her intelligence rather than on her looks.”

Her dad had always insisted that they respect other cultures, so she finally broke down and let him put the darn thing on her. What a pain! Even her own mother wouldn’t have known her. Brother, she thought, am I glad I don’t have to fool with this stuff all the time.

The two suitcases went into the trunk. Dr. Hassan had said that it would be preferable, since she didn’t speak the language, to let the driver handle the airport formalities. It annoyed her – didn’t these men think women were capable of anything? – but she capitulated and let the driver take the ticket and passport. She eased into the white leather seat. She sighed contentedly, and to her amusement, the veil puffed out. She experimented blowing it out and sucking it in. Fascinating.

She groaned when she noticed that the limo windows were heavily curtained, reminding her of a hearse. Dr. Hassan had told her that the Arabic word for “chaste” or “clean” also meant “well guarded,” but they took things to ridiculous lengths. Oh well, just this once was no big deal. Besides, she was feeling downright woozy. “Yes, Jensen, another glass of champagne, thank you dahling. Oh, dear me, an emergency! I’ve nicked a nail! Fifi, quick, a manicure, dahling.” The veil obligingly went puff-puff-puff. How could Arab women talk to each other and manage to keep a straight face?

The driver cast questioning looks at her as she chattered away to herself. Okay, so she was feeling silly, but didn’t she deserve a little fun? What really mattered was that she was on her way home.

She felt like she’d had about three “ti many martoonis” by the time they arrived at a huge gated compound where Dr. Hassan had mentioned that they would drop something off. She hadn’t expected to get out of the car, but after the driver spoke briefly with one of the sentinels, he drove through the gate and grandly opened the door.

“Oum Mohammed, Sheikh Khalid’s wife, invites you to have a refreshing glass of lemonade with her.”

“But we need to get to the airport.”

“We have time. It would be extremely rude to refuse, and ten or fifteen minutes won’t really matter. Don’t spend all afternoon, though, or you’ll miss your plane.”

“Fat chance of that!” Maybe some lemonade would perk her up a little. She finally located the assorted parts of the black lump and managed to get them all out into the staggering heat. She almost swooned.

Ferocious-looking guards draped with bandoliers of ammunition relaxed on a wide arched portico, behind them to the left a beautiful white marble building, to the right a vine-covered wrought iron gate. One of them nodded politely and unlocked it, and Tammy was admitted into a small courtyard where she was immediately greeted by two smil-ing women wearing long dresses but – much to her indignation – no cloaks or veils. Then she remembered. Behind a locked gate. Behind a high wall. What Dr. Hassan would call “protected.”

“Ahlan wa-sahlan,” Welcome welcome, the taller and very pregnant one said, a large-boned woman of maybe 35 with a plain face and pretty eyes. “Ismii Zeynab. Zeynab,” she repeated with a smile. My name is Zeynab.

They seemed to be expecting her.

“Ismii Haifa,” My name is Haifa, the other one said. She was much younger, quite pretty, Asian, and only half as pregnant. “Alhamdulillah alla salama.” She knew Alhamdulillah meant thank God, because Dr. Hassan made sure she said it after every meal.

“Ismii Tam,” she replied, recklessly using up a huge percentage of the Arabic that Nurse Nessim had taught her. She said it a little more breathily than she had to, to make the veil puff out. It did. She giggled. Haifa and Zeynab seemed puzzled. Then she giggled again because they hadn’t. They exchanged nervous glances, like, are Americans always this harebrained?

“Taamm.” They pronounced her name like Dr. Hassan did, stretching it out like salt-water taffy. He said it meant “complete,” but for all she knew it meant “complete idiot.” The trouble was, she was never entirely sure she could believe him, because he was always skating on the border between chivalry and mischief and wasn’t above saying something flattering even if it weren’t entirely true.

The courtyard was set with potted geraniums and lemon trees. A grape arbor provided a little thin shade, cutting the 120-degree heat to a mere 115 or so. Off to the back was an odd wooden building with a pair of huge doors that looked like they belonged on a medieval castle. She giggled. Zeynab let them through with a six-inch key. She and Haifa helped Tammy out of the cloak and veil and exclaimed admiringly over her wilted Gucci. Her wrappings took their place, next to many others, on hooks by the door. They were as alike as quarters. How would she know the right one to take when she left? She giggled again. What difference could it possibly make?

It was only marginally cooler inside the house. That lemonade, perchance? Dr. Hassan had said that Sheikh Khalid was a fabulously wealthy commodities trader. Maybe so, but his house was a shambles. From the entryway of chipped patterned tiles, they climbed a rickety stairway that led to a shabby living room with lattice-covered windows and built-in couches. Two middle-aged women were doing needlework and a curly-haired girl was teaching a teddy bear how to read. Oh good, Tammy thought, now for that lemonade. She stopped, too dizzy to continue, and steadied herself. She made circles in the air with her finger, and they seemed to understand. They helped her up and continued around a couple of odd corners, up two or three more small flights of swayback wooden stairs, flattening themselves against a wall while squealing twin boys raced by. I’ll be darned, she thought, if this is where the women and children live, it must be the harem. I’m actually visiting a sheikh’s harem. Wait until Elaine hears about this!

It wasn’t at all like Hollywood had led her to expect. A touching crayon drawing of a purple horse? What, no belly dancers, no be-jeweled women in harem pants lounging seductively on fringed sofas?

Where were the naked-chested eunuchs in draped pants and gold earrings? Even an ironing board? Her father would be pleased with all the stereotypes this short visit had exploded.

Next stop on the tour was a small dim room furnished only with a window-seat. Tammy looked politely out the window, trying to see what the world looked like through a carved lattice screen. She turned around just in time to see the door close. That’s odd, she thought, where’d everybody go?